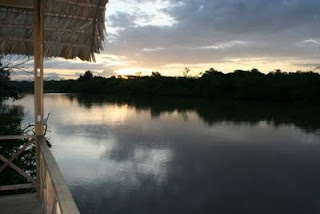 This week, El Faro posted a story on a recent environmental report that identifies the Lempa River Basin as one of the regions particularly vulnerable to climate change. Dr. Edwin P. Maurer and his colleagues from the University of Santa Clara authored the report, in which they find that storms in the Central American region will continue to grow in both intensity and frequency. Their review of climate change models also reveals that the region is also vulnerable to more frequent droughts.

The Lempa River Basin is the largest river system in Central America, passing through Honduras, Guatemala, and El Salvador before emptying out in to the Pacific Ocean. With a drainage area of 18,000 km2, it is directly affected by changes related to global warming, according to the report. In addition to providing water resources to cities and communities throughout Central America, the Lempa River generates an estimated half of El Salvador’s energy via hydroelectric dams. The report attempted to answer 3 main questions. The first, what are the projected changes in the rain and temperature in the river? The second, what are the projected changes in the flow of the river? Lastly, will the impact of climate change be statistically significant?

The report found that by the end of the 21st Century, the Lempa River Basin will likely experience the following changes:

The average temperatures will rise 1.9-3.4 degrees centigrade, with the highest increases during the months of June and July;

Climate change models agree that the region will be drier, with a 5-10% decrease in precipitation – they project that May and June will be much drier, extending the dry season well into the first half of the rainy season;

The flow of water to the largest hydroelectric dams will decrease by 13-14%;

July and August will experience the greatest decrease in flow of water, falling off 21-41%;

The capacity to generate electricity will likely decrease by 33-53%.

The report’s findings have serious implications for El Salvador. The authors advise that agencies in charge of water management in the region prepare for a reduction in water resources for consumption purposes, and energy production. The impact will also affect agricultural production, at very least shortening the growing season, which traditionally begins in early May. Farmers who depend on the Lempa River to irrigate their crops may also have fewer water resources with which to do so. El Salvador’s water supply has already decreased in recent years, with dramatic drops in water tables, and widespread contamination of the country’s surface waters. A further decrease in water resources could be catastrophic.

The report also has implications for the El Chaparral Dam project in Northern San Miguel. While El Salvador’s demand for energy may increase, investing in another hydroelectric dam seems like a poor use of limited resources when other options such as solar and wind energy production are viable.

Though much of the report discusses the impacts of droughts and decreases in precipitation, the climate change models also predict that the region will experience stronger storms more frequently. This could mean that regions such as the Lower Lempa region San Vicente and Usulután could experience even more flooding.

Industrialized countries such as the U.S., China, India, and others have time to lower their carbon emissions and lessen these impacts. Until they do, communities in the region ought to begin preparing. Possible steps may include strict water management regulations that ensure equal access to water resources, and end the large-scale contamination of surface waters with industrial and municipal waste. El Salvador and its neighbors ought to continue its fight to prevent mining activities that threaten water resources such as the Lempa River with heavy metals and other toxic waste. The government of El Salvador must fulfill its obligation to complete the systems of levees and drainage ditches that protect the Lower Lempa of Usulután and San Vicente, and other regions from flooding during strong storms, prolonged rains, and mismanagement of the hydroelectric dams. And each community ought to have risk management and emergency response plans in place that anticipate all scenarios and consider impacts on food production and economic development. Most importantly, we should all take greater steps to lower carbon emissions, and pressure governments of industrialized countries to agree to tougher regulations that lower emissions.