This is the next edition of the El Salvador Journal 2005.  I will be posting the remaining chapters of the journal in the next few weeks.  As we move into the fall, I will be posting to the blog on a weekly basis to keep future participants in the Compadres program well supplied with information on the Compadres program.
We next visited FUNPROCOOP, another one of our partners.  They brought us up to the of to one of the two indigenous communities that still exist in .
Something very interesting about the native people of .  Unlike and , the native heritage of is not nearly as evident.  There is good reason for this.  In 1936, over 30,000 indigenous people were killed after a failed upraising. You don’t find any evident native presence anywhere in the country except in the faces of the people.  In Sonsonate we felt this presence.
We visited Chaletengo in Sonsonate.  There was an indigenous co-op community in this area and we were to spend the afternoon with them.  We visited them on a community workday where all members of the co-op worked on common projects for the day. This is called ‘Teshicalt’.  This is one of the 60 communities that FUNPROCOOP works with.  There is a real emphasis on the use of organic pesticides and fertilizers, local seeds, and traditional agricultural know-how. 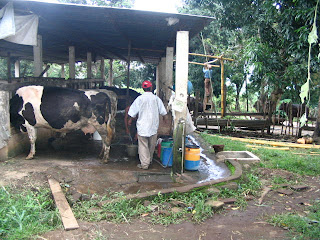 FUNPROCOOP indigenous community
In Chalatengo there is an agricultural college that trains people in the traditional methods.  The knowledge of the ages is passed on to 50 participants at a time.  These methods are allowing people to produce an amazing variety of crops.  At the co-op, we were told that they could plant over 30 varieties of corn and 20 different types of beans.  The co-ops are concentrating on what they are good at for local distribution.  This makes sense.  I asked why they don’t plant tomatoes for export as the ambassador suggested.  They told me it costs over $6000.00 an acre to plant tomatoes – corn and beans are free, the people collect their own seeds.
The work of FUNPROCOOP is rooted in activism.  To work with local people in an oppressive atmosphere means that you become radicalized.  They work for communities threatened with removal by big dam projects.  They have occupied the legislative assembly to protest neo-liberal policies of the government.  The next day, the pictures of the group’s leaders appeared in the right-wing paper.  Activists are now called ‘terrorists’ just like the 70’s when they were called ‘communists’.  They receive death threats just like the activists of the past.  The crisis in this country deepens.
Posted by mcswa1@gmail.com at 8:15 AM