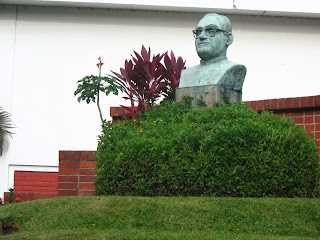 Day Four of this year's tour will be taken up by the Romero Tour.  The last three entries have been taken up with the tour.  The last entry is included below.  Tomorrow, I will move on to Day Five.

The tour will take in other important locations including most significantly, the Romero Center at Central American University, the site of the 1989 Jesuit Massacre.   The Romero Center includes many relics from the time of Romero including artifacts from the murder of Oscar Romero's friend Rutilio Grande.  The center also focuses on the murder of the Jesuit priests in 1989.  The rose garden you can see in a few of the pictures here was planted by the husband of the priests' maid who was also killed during this incident.

There is no question that this is a crucial part of the tour.  While there are other locations we may visit, these are the key ones to help us get a sense of the importance of Oscar Romero.

I have included a few key images from the Centre in Tour Builder.