Over the past two years, we have gained a greater understanding of the work of CRIPDES. The NGO started during the war assisting refugees to return to the land they had abandoned at the start of the conflict. The organization has evolved from resettlement to social and political organizing. They now work in 350 communities across the country. They work on a whole host of issues, including land redistribution, mining practices, the privatization of water and the empowerment of youth and women.

For our part, our teachers have mainly come from the Ottawa Catholic School Board, but we are working on expanding to other parts of the province. This year, we had our first teacher from Toronto. We have brought relatively small groups down for the last two years and this has enabled us to explore different ideas on partnership for the future. Each trip builds on the last. We now have a good idea on where we should be heading. CRIPDES along with Salvaide are now working on ideas for a project. After two years of trying to define what we are about and what we will do, it is very appropriate to turn this task over to our hosts who have such a complete understanding of the social, political and economic situation in El Salvador. 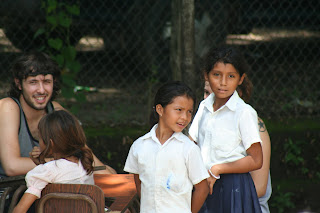 students at recess in El Pacun
Posted by mcswa1@gmail.com at 3:30 PM