The analysis is very important for us. Too often, we are willing to give without ever asking the question – why is it really necessary to give? Why are they so poor and we are so rich? Whatever we do in El Salvador, it will be important for teachers to understand the root causes of the poverty they see.


What does economic and social development look like? CORDES believes in following an approach that is different from the current economic model. For CORDES, it is important that the producers are the owners of the production chain. The market is simply an instrument to allow people to share the wealth.

There is a strong focus on food security, crop diversity and fair trade. There are many examples of projects that CORDES has funded that allow people a greater share of the wealth. These include women’s co-ops producing cheese and cashews for national and international markets, production of fruits and vegetables for the national market, production of organic sugar and the training and technical assistance for local fishermen with the objective of selling produce nationally.

One example of CORDES work is cashew production. The communities are involved in the total production process from the planting of cashew tress to the production of cashews and cashew juice for export to Brazil. Production is going well; they now have machines to extract the cashew from the husk. Before this, workers would bask the hard nut to get to the cashew. This is part of the organic agricultural movement that also includes the production of sugar cane, vegetables as well as non-chemical pesticides. 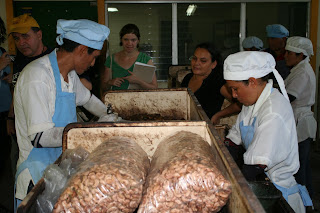 CORDES also has links to other Latin American organizations. They have taken part in international forums on transitioning from war to peace.

If we ask the question, what does it mean to build a better world, CORDES members would respond it means a world that is more just than now. There is a need for change in the North. The level of consumption is too high in Canada and the United States. We need to learn to consume at a responsible and realistic level. There needs to be more solidarity with the North to better understand the challenges of the Global South. What CORDES has seen through their student program with Spanish universities is that the students go back transformed and better able to follow responsible consumption practices. What would happen if our teachers were exposed to such an environment?

Because of the economic crisis, there are now fewer remittances from the North. Remittances is a major source of income for the people of El Salvador. People who are working in Canada and the United States send money back to their families. The flow of money is beginning to dry up. This leads to further economic pressure on the people. More opportunities need to be created for youth so that there is incentive to stay in the country. For example, in Bajo Lempa there is a youth project to produce clay bio-filters for water. The technical expertise for this project comes from Brazil. The filters can extract over 90% of bacterial contaminants in the water. There is only one production centre in all of El Salvador and the filters are in high demand. 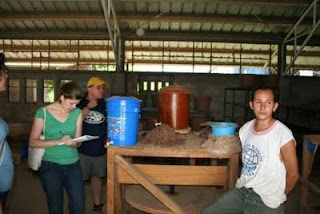 The bio-filter project
Posted by mcswa1@gmail.com at 11:28 AM