Our first full day was spent with two organizations, CRIPDES and CORDES. CRIPDES is our sponsoring organization. They had hired Roberto as our interpreter for the trip and we met him at the CRIPDES offices. Roberto and Miguel became our good friends and our best sources of information. Much of what we know about the lives of Salvadorans came from their stories. 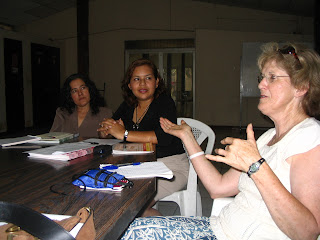 We were introduced to Marta Lorena Araujo, President of CRIPDES, and Janet of CORDES.

CRIPDES started July 14, 1984 as an organization to support the people of El Salvador during the war. Originally, they worked with displaced people. CRIDPES works in 300 communities in El Salvador to support these communities in the establishment of basic services like health care, clean drinkable water, basic education and electricity. This reconstruction process began in earnest in 1986 when CRIPDES began to assist rural communities to relocate from refugee bases in Honduras, Mexico, Nicaragua, Costa Rica and Panama.

The repatriation process is one of the early achievements of CRIPDES. In this they worked without government assistance. Support did come from the international community for the building of homes, roads, water infrastructure, education and health care. This rebuilding process continues to this day.
Posted by mcswa1@gmail.com at 9:44 PM