We went to a lot of meetings in the first two days in El Salvador. On our second full day we met with Equipo Maiz, the Corn Team, who gave us an alternative history of El Salvador. History is so important if we want to get a true measure of the character of a country. This is the specialty of Equipo Maiz. They have worked since 1983 with small communities to develop a greater understanding of the people’s situation. Through workshops on gender issues, civil participation, privatization and leadership, they hope to equip people with the knowledge to better understand their current situation. They also specialize in telling the story of El Salvador’s past.

A key point in the story. In 1932, the government exterminated over 30,000 indigenous people after a failed revolt. This has resulted in the total denial of the native heritage of the Salvadorans. Unlike Mexico and Guatemala, there is no talk of an indigenous culture in El Salvador. There are really only two indigenous communities now in El Salvador. You can see the native heritage in the faces of the people, but the culture is kept in check. People fear a return to the 1930’s. They have good reason for their fears. Other countries like Haiti and Guatemala have suffered from similar disasters. 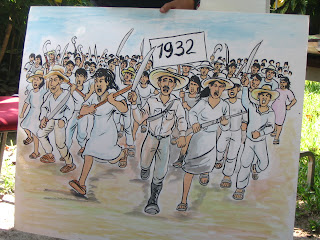 Equipo Maiz uses artwork to illustrate their talks on the history of El Salvador
Posted by mcswa1@gmail.com at 6:26 PM