Access to services is a human right. As women’s groups trained by the Consensus Table work to pressure local governments through the budget process and training programs, it is hoped that progress for women will be possible. 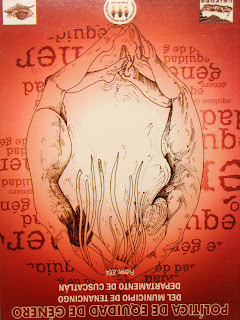 We continued our education by spending the afternoon with CDC – Centro Para La Defensa del Consumidor. Knowledge is power and this agency has done a great deal of work to protect the Salvadoran consumer through research and data gathering. They maintain that once organized, people can struggle successfully for their own rights.

They work to support the protection of human rights by pressuring government agencies to respect the rights of the people. They work at the grassroots level with links to national and international organizations on issues like genetic engineering, health care, CAFTA (free trade), and water.

CDC teaches people to become more vigilant. ANDA, the country’s water agency has been infamous for its over billing of the people. CDC has trained people to read their water bills accurately. They have revealed that ANDA has over billed its consumers by over $20 million dollars. This effort was organized through ‘fairs’ where people were invited to bring their water bills for analysis. During these sessions the corruption of ANDA was exposed. 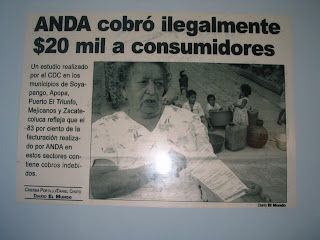 This is a poster from CDC. It shows a woman with her water bill. The headline relates how ANDA, the government water agency has defrauded the people of $20 million dollars by overcharging on its bills.
Posted by mcswa1@gmail.com at 8:18 PM