At the end of a long day of visits, we visited the offices of Pro Busqueda. The office was started by Fr. Jon Cortino, a Jesuit priest in San Salvador. Fr. Jon was one of the seven priests targeted by the military in 1989 for assassination. Incredibly, he was not at the university the night the priests were killed. He continued to live in the country for the rest of the war and returned only in 1993 to start an organization that has done a great deal to bring families back together.

In 1993, his new organization was able to locate five children who had been taken by the military during the war. This was a common practice. The children would then be given or sold to families that were looking to adopt a child. The following year, Sobrino had 75 requests and found 13 boys. His organization has now solved 301 cases and has found children in over 13 countries including Canada. He has even been able to take the Salvadoran government to court for Human Rights violations. The International Court has ruled in his favour. He is still waiting for the Salvadoran Government to acknowledge the ruling of the court.

His stories read like a detective novel. Requests for information come from all over the country. His investigators return to the site of the abduction looking for clues. In most cases, the families have moved on, in many cases more than once. Someone hears of a story of where the family has relocated. The trail often leads in a wide circle as families attempt to move to locations near their original settlement. With good community support the investigators can be very successful. 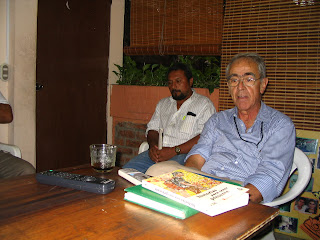 He tells great stories about how to resurrect after a great and hurtful conflict. The walls of Pro Busqueda are pasted with the pictures of family reunions. Families separated by great tragedy share a moment of unexpected joy.
Posted by mcswa1@gmail.com at 8:17 PM