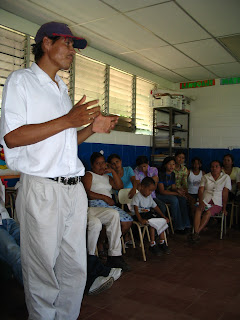 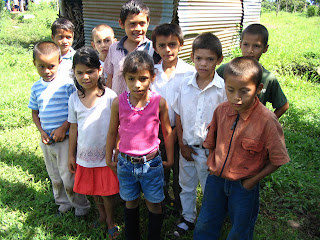 The children of Laura Lopez

The first few days of our time in were full of meetings. This was our education to the history, economics and social dynamics of the country. Armed with this incredible information, we headed out into the countryside to meet and talk to the people. I will start with our visit to Laura Lopez.

Laura Lopez is a resettled community supported by CRIPDES. We visited the community after a long drive out of . The community was resettled in 1992 and is named after a lay worker associated with Rutilio Grande who was killed in this area during the war. We actually saw her picture and read a description of her work at the university later in .

The first families arrived in an area that had been depopulated by the military. They arrived only with what they could carry. They tented under the shade of the mango trees and were soon followed by other families. Within the month, there were thirty families living in the area. At this point they had no housing materials, just pots and pans. PROGRESO, the local name for CRIPDES and FUNPROCOOP helped the families to build homes. The Archbishop also helped the families and they began to divide the land into plots.

In the next thirteen years, the community grew. People continued to move to the area and Laura Lopez built a school for their children. The community now also has electricity and water. They hope soon to have a clinic in the community as well. On our tour of the community we were taken to the future site of the health centre. There are now 60 families living in the area.