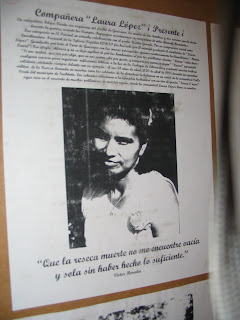 One incredible thing about this community was their level of social organization. We were introduced to members of the school council, the women’s committee, the pastoral team, the youth group, the woman’s soccer team and the community directorate. Our welcoming committee had representatives from all these groups; they were our hosts for the day. Each committee member had an opportunity to present some aspect of the community’s history.

These people are very politically aware. You could say that when they originally settled in the area they were squatters. This is an area that was controlled by the FMLN during the war. The government, still controlled by the ARENA party was not going to make it easy for the people to gain control of the land. During the first election campaign in 1994, the FMLN won control of the local seat in Suchitoto, which has jurisdiction in the Laura Lopez area. With the help of the FMLN in the Legislative Assembly, the people were able to gain legal title to the land. With the help of groups like PROGRESO, they continue to make great progress. This is a community that has a vision for its future.

These people face great challenges. Each of them has their own story of struggle during the war. Most have family members who were killed during the war. In some cases they witnessed the death of a loved one as they tried to avoid the army. The land is rich producing rice, cucumber, squash, many varieties of corn and beans, green pepper and peanuts. However, exports cheap corn to . Salvadoran farmers receive no support from their own government for fertilizers or pesticides. They have no access to long-term credit so farmers have no way to export what they produce. There is a feeling in this country that agriculture doesn’t work, that there is no way to compete with the agricultural giants to the North.

When you have a chance to see fields of beautiful corn and beans it is really hard to understand how this idea has taken hold in .

At the same time, the Salvadoran Government wants to bring cheap goods into the country. CAFTA, the Central American Free Trade Agreement, promises to flood with cheap American and Mexican goods. , struggling back from the devastation of a civil war has little to counter this flood of goods. We did not meet many people who saw any salvation in CAFTA.

To fight back, these people are trying to produce the goods that have sustained them for centuries. As they say, “Let’s do resistance with very concrete projects.” They are starting to look at very different economic models that can support a local economy. If these communities can feed each other and trade their surplus locally they may find a way out of the economic sinkhole they currently find themselves in.