We finished our time in with a conference – Encuentro Du Solidaridad y Hermandad – Solidarity and Brotherhood Sisterhood Encounter.  I was struck here as in other places how present the memory of Oscar Romero is in this country.  He has been dead for 25 years but he truly lives in the people.  This conference was organized by CRIPDES and CORDES and we saw many of the people who we had worked with over the past two weeks.  Jorge, our organizer from was there.  People for the Laura Lopez community were there.  Lorena, the president of CRIPDES was one of the guest speakers.
The conference stared with the rallying quote from Romero. “It is very hard for the people to understand the path of liberation.  If you want the violence to stop we have to go to the root of the problem – it is social injustice.”  We are still trying to live this.
What a great way to sum up our experience here in .  The conference was infused with the spirit of solidarity.  The conference leaders talked about building alternatives.  We had seen evidence of this in the stories of all the people we had encountered.
One story that must be told is that of our hosts Damian and Carolina Alegria.  Their story is transcribed below from e-mails  sent back to the family each night after Damian related part of this incredible history.  The e-mail took three nights to send:
I should tell you about our host Damian.  During the war he, as a young
engineer, worked in communications and did ciphers; that is coded messages.
He worked as part of a secret group of insurgents in the capitol who worked
against the government.  He had been accepted in the military wing of the
FMLN after being in the party for over a year.  He joined after witnessing
the aftermath of a massacre in .

Damian’s work was very dangerous, one of his associates simply disappeared one day on the way to make contact with someone in the city.  He was a good friend of this man.  He was never found, but the man’s family adopted Damian to be their new son.  They
still introduce Damian as their son.

Eventually Damian was captured and put in jail.  He was tortured, but he was
very smart.  He convinced his jailers that he was a petty criminal and they
stopped torturing him.  He was able to get a message out to his friends and
the guards were bribed and he was let free.  He was then smuggled out of the
country to .  There he recovered from the effects of the torture.
Once he returned from , Damian became a political
officer in the mountains where he worked with the soldiers and families who
were displaced from their homes.  The insurgents were responsible for dealing with large number of refugees displaced from their homes by the army.  Damian especially had difficulty convincing young Salvadorans to remain with their families.  Many of them wanted to become guerillas to fight against the army.
Damian was eventually reassigned to where he worked to smuggle wounded combatants into local hospitals. He met who was tending wounded insurgents.  originally had planned to become a nun, but decided to work for the guerillas once she realized her entire family was involved in efforts to defeat the army.
Eventually, Damian was captured for a second time.  He was not allowed to sleep for five days.  He was not allowed to have any water, but he drank from the prison toilet to keep himself going.  Based on his knowledge of European capitols, he was able to convince the military that he was actually a Russian spy and they actually released him.  The army thought that the rebels would kill him as a traitor.
He was taken back and after three months of  interrogation he was again
working in the mountains
In the afternoon we heard the end of Damian´s story.  He went back to the
mountains where he staged a raid to convince his compatriots that there were
many on their side, this is hard to do in the mountains.  He instructed all
his people to go into town and explode a grenade at 8:00 PM.  They did this
and made a huge demonstration of their strength.  This helped the guerillas
not to lose heart.

Later he took part in the great offensive in the city.  It failed, but the
world started to take note of what was going on.  Soon after, he was
captured again.  This time he was tortured badly, but he refused to talk.
Eventually he was sent to prison where he and his compatriots took over a
wing of the prison.  He was let go a third time and returned to the
mountains.

There he became the press liaison and he was responsible for giving press
conferences.  At one point, the military announced that he had been killed.
He actually heard this on the news.  This was done to discourage the
guerillas.  After some time he was able to call a press conference to
announce that he was very much alive.

Eventually the war ended and Damian and his wife were able to return to the
city where they were helped to start a guesthouse.  They have since moved
to a bigger house where they now live.  Damian continues to work for the people of .  He is currently working on a national radio project designed to send out a message to the populace free of interference from government sources. 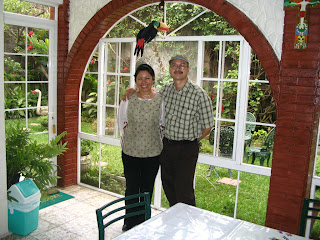 Damian and
This has been an inspiring journey.  I have learned a great deal about the ability of people to struggle against injustice.  They continue to work and they do not lose heart.  I realize that we need to be compatriots with these people.  Their struggles are our struggles and we must work in solidarity with them to make sure they see a day when there is a fair measure of justice in their land.  They have so much to teach us.  I hope we all listen.
Posted by mcswa1@gmail.com at 8:50 AM