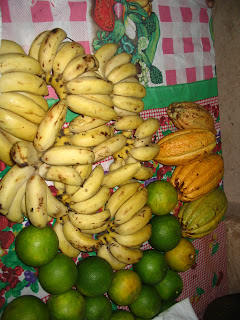 Visits to UNES communities reinforced what we heard from Dago.  We visited where there are a collection of cooperatives working to grow local produce.  At our first community, we were greeted with a table overflowing with local produce.
This is the table that greeted us in Armenia.  On the table we find bananas – they grow four different varieties, cocoa, and bananas.
We had a great lunch of beans, tortillas, and local greens all cooked on local stoves that are very efficient in their use of fuel.  Development and Peace has supported the development of these stoves. 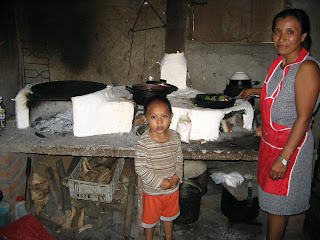 Our lunch was cooked on these stoves.  The funding for the stoves comes from Development and Peace.
The woman in the picture was our host and is frying up some of the delicious local greens.
These communities are learning what grows well in their adopted homes.  Over the past decade, these co-ops have established themselves firmly on the land.  The woman in the picture above is typical of the people you meet in this area.  When the co-op was threatened with the loss of their soccer field by a corrupt local mayor, she took him to court.  It turns out that the land didn’t even belong to him!  The court decided in favor of the co-op and the soccer field belongs to the community.
Struggles continue for access to water, health care and adequate education, but these people are fighters and are convinced that they have the ability to improve things for their communities.
The women here have been trained in leadership skills through an institute that is funded by Development and Peace.  Women from the institute have been involved in reconstruction efforts – a major earthquake had previously devastated the community.  They have learned to look for high-risk areas in their villages.  Housing techniques that secure homes from earthquakes have been developed and implemented by the people.
They continue to fight for access to water.  Another woman we met has worked very effectively to pressure the local government to develop a fair price for water.  She showed us her account book where she keeps a regular tally of the water rates.  She has challenged local water officials to justify the rates they charge.  This is very important in a country where the water meter readers can’t read!
These women have also been able to get the local mayor to agree that the forests and community lands all belong to the people.  This is extremely important.  Forestland contains runoff and guarantees that water will remain in the community.
When people are trained in their rights they can pressure the government to follow through on their commitments.  This is where we see the realization of what Dago spoke to us about.  Access to essential rights can only be guaranteed when you have a population that clearly understands their basic human rights.  This is where Development and Peace funding can be very effective.
There is a great story about the power of these women to mobilize.  At one time, the offal produced by a local pig farm polluted the local river.  The women had to wash their clothes in water that was very polluted by the farm.
They demanded that the farm move away from their community.  To back up these demands, the women actually occupied the farm.  This was necessary; all their petitions to health officials and local mayors had failed.  Three hundred women were involved in this occupation.  They would not allow the pigs to be fed until their demands were met.
After the intervention of the bishop of Sonsonate, the owners agreed to move the pigs out.  They had ninety days to move them all out or the pigs would go to the women.  Teams of women were stationed at the farm to monitor the progress of the move.  On May 7 of this year all the pigs were moved.

This is a great example of what women can do when they are mobilized.  Women from this group are now touring the country to let others know what is possible.  There is great hope for these communities.
Posted by mcswa1@gmail.com at 1:35 PM