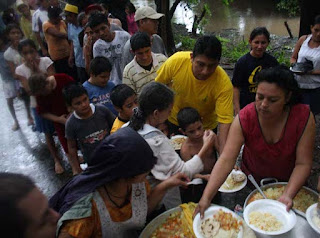 There is a great deal of information coming out of El Salvador this week about the flooding that is taking plce. Some estimates predict that the flooding will ruin as much as 60% of the crop yield this year.

Thousands of people have been displaced from their homes. La Prensa has a good gallery of photos on the flooding.

Here re some excerpts from other blogs:

The country is under a state of emergency. In a press conference Saturday night, president Funes called for all elements of Salvadoran society to pull together. As of tonight some 13 thousand Salvadorans have been forced to flee their homes, and the death toll has risen to 10.

Emergency efforts to distribute food are underway for families forced from their homes. Donations are being received from many sources, and the Salvadoran armed forces are participating in distribution of emergency aid.

we are under constant rain here, 5 full days now and no clear end in sight.


a tropical depression is just sitting here by the coast and another possible storm approaching, the whole coast and central volcanic mountain chain are under red and orange alert, highly vulnerable, rivers are swollen and flooding surrounding areas, some bridges are out, 2 out of 4 border crossings to Guatemala are closed.


the president has declared a state of emergency so that all resources can be directed to responding to saving lives and repairing damage as well as looking for international aid.


there are 13,000 people in 170 shelters, 8 people have died mostly due to mudslides, the soil and rivers are over-saturated, classes are suspended.

Voices staff is headed back down to the Lower Lempa tonight, where a total of some 2,570 + personas are evacuated, and many more unsure of how they’ll get through the storm. Many families are also camped out along the road, with their homes flooded out, but unwilling to go to a shelter.

We are meeting up with a delivery of mattresses from our friends ADES, in Cabañas. The mattresses will be delivered to the Amando López shelter, where 460 people are currently sharing 30 mattresses.

The Prensa Grafica reports 8,000 people evacuated at the national level, but since the numbers have been increasing rapidly this afternoon, we imagine that it is much higher.


An emergency appeal is being organized through Salvaide


I will send out more information when an appeal has been organized.

Email ThisBlogThis!Share to TwitterShare to FacebookShare to Pinterest
Labels: flooding in El Salvador