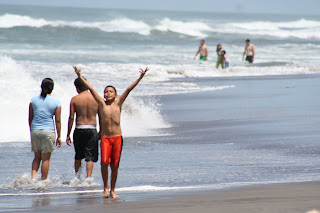 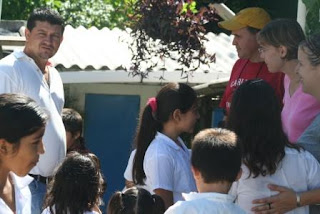 The next trip to El Salvador is being planned. We have a group committed to taking part in this year's experience, but we would like to include more people.

Do you need to be a teacher to go on this trip? No, we are all about developing community, so we will not exclude anyone who wants to be part of this experience.

Who will we be working with in El Salvador? We have several great partners - starting with CRIPDES,the largest rural organization in the country and a leader in the Salvadoran social movement. Its current mission is to strengthen and develop organizing in rural communities as they struggle for an economically, politically, and socially just society.

We will also be working with Teachers Without Borders on a specially designed program that incorporates elements of their Certificate of Teaching Mastery program with the Millennium Development Ambassador program. A draft of this new program will be available this January.

Who else will you be working with?

Will we be working with any local organizations? Yes, we will be working with Nelson Orellana, the Secretary of Popular Education, for The Association of Communities for the Development of Chalatenango-CCR. Nelson is also principal of one of the schools in San Jose Las Flores and will be designing much of our program for this year. The CCR was founded in June of 1987 during the armed conflict in El Salvador, as an answer to the need to repopulate the communities of the North-eastern part of Chalatenango that had been destroyed by the armed conflict. Thanks to the work of the CCR the people who were exiled in the refugee camp in Mesa Grande Honduras, refugee camps inside the country and in other countries were able to repopulate the communities devastated by the war. With the signing of the Peace Accords in 1992, the CCR reoriented its work to organize and facilitate the reconstruction of the communities, and advocate that the Peace Accords be met and the process of democratization of the country move forward.

What are some of the elements of the program?

Visits to historic sites in Sal Salvador - Visit to Divine Providence church were Monseñor Romero was killed; Monseñor Romero's House; the memorial to civilian victims of the military repression and the war at Parque Cuscatlan; UCA (Jesuit University). museun.

Visit to the beach - El Salvador is quickly becoming a great tourist destination. We will spend one day at the beach on the Costa del Sol area.

We will also visit the offices of CRIPDES Equipo Maiz and other organizations involved in social justice and popular education work.

How much will the trip cost? Costs are approximately $2100.00 including transportation, accommodation, translation and group facilitation. Participants are responsible for their own lunch and dinner.

If I am interested, what do I do? Please send an e-mail to Paul McGuire at mcswa1@gmail.com
The first deposit of $500.00 is due at the end of January. We will hold one final information meeting in mid-January for those who are interested in the program.

When are we going? We are planning on a 14-day trip starting on July 3rd.

Email ThisBlogThis!Share to TwitterShare to FacebookShare to Pinterest
Labels: Compadres