Greetings and Merry Christmas to everyone. We are just months away from the next trip to El Salvador. I think it is time to start blogging again in preparation for the next trip.

While I have been sending out Facebook messages on a regular basis, it is time to start writing something more specific to the trip.

Today, some information on CRIPDES, our hosts in El Salvador. This is an excerpt from my 2005 journal entry on our Development and Peace trip:


Our first full day was spent with two organizations, CRIPDES and CORDES. CRIPDES is our sponsoring organization. They had hired Roberto as our interpreter for the trip and we met him at the CRIPDES offices. Roberto and Miguel became our good friends and our best sources of information. Much of what we know about the lives of Salvadorans came from their stories.

We were introduced to Marta Lorena Araujo, President of CRIPDES, and Janet of CORDES.


Janet and Lorena at our first meeting at CRIPDES


CRIPDES started July 14, 1984 as an organization to support the people of El Salvador during the war. Originally, they worked with displaced people. CRIDPES works in 300 communities in El Salvador to support these communities in the establishment of basic services like health care, clean drinkable water, basic education and electricity. This reconstruction process began in earnest in 1986 when CRIPDES began to assist rural communities to relocate from refugee bases in Honduras, Mexico, Nicaragua, Costa Rica and Panama.

The repatriation process is one of the early achievements of CRIPDES. In this they worked without government assistance. Support did come from the international community for the building of homes, roads, water infrastructure, education and health care. This rebuilding process continues to this day.

While the Peace Accords were signed in 1992, the struggle continues. The people of El Salvador continue to struggle for basic human rights, access to clean drinking water and good quality education. In the rural communities the provision of good quality health care continues to be a very real concern. Families struggle to make ends meet. The minimum wage provides a worker a salary of $154.00 (US) per month. CRIPDES and other social organizations estimate that the cost of living is closer to $625.00 a month. Prices continue to rise for basic services like water and transportation; wages are not keeping up with these increases. It is becoming increasingly difficult for families to survive. 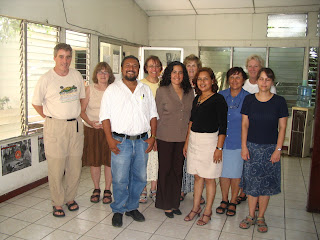 our first meeting with CRIPDES in 2005, the start of a great friendship.

CRIPDES, our Sister Organization in El Salvador
Sister Cities is proud to work directly with the Association for the Development of El Salvador (CRIPDES) the largest rural organization in the country and a leader in the Salvadoran social movement.
Formerly the Christian Committee of the Displaced, CRIPDES was founded in 1984 to support people displaced by the Salvadoran civil war as they returned to their homes. CRIPDES organized and accompanied re-populations, strengthened local organizations so that people could stay in their communities, and called for a negotiated solution to the war.

After the Peace Accords were signed in 1992, CRIPDES became the Association of Rural Communities for the Development of El Salvador. Its current mission is to strengthen and develop organizing in rural communities as they struggle for an economically, politically, and socially just society. Day-to-day, CRIPDES supports community organizing of the rural population, popular education and mobilization for political advocacy.

We are again working with CRIPDES to prepare for this year's trip. I have been in regular correspondence with Miguel 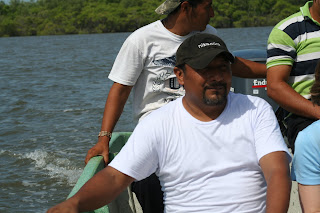 Miguel - our main contact in El Salvador - I work with Miguel to set the schedule for the trip.

Miguel has seen our project develop over the past three years, he is very well situated to respond to the developing nature of the Compadres program. He works closely with the communities we will be visiting.

Next entry - Nelson and San Jose Las Flores
Posted by mcswa1@gmail.com at 8:14 AM