Partner profile - Association of Communities for the Development of Chalatenango-CCR 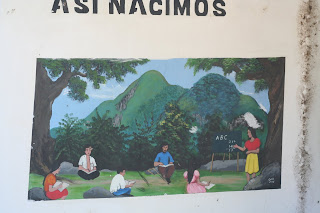 A new feature of the program, this year Compadres will be working with the Association of Communities for the Development of Chalatenango-CCR. Our contact with the CCR is Nelson Orellana, the Popular Education Director for the organization. We met Nelson on our last trip to El Salvador. He is a principal in one of the schools in San Jose Las Flores and is involved in a variety of community initiatives in the Chalatenango region. Here is an excerpt from my journal entry written after our first visit to Nelson's community:

San Jose Las Flores has a thriving school community headed by Nelson, a true education innovator. Their first schools were built from the rubble of crumbling buildings. Nelson started teaching with a third grade education. His students used charcoal to write on rocks. By the end of the war, a group of teachers were able to upgrade their education and become certified. Now there is a branch of UCA, the Jesuit University in San Jose Las Flores. Over 300 students have signed up to take courses at this satellite school. Teachers now receive training in the community. This community has had a long-lasting connection with the Sisters of Ascension in Spain and from the city of Cambridge, Massachusetts through the Sister Cities Program. Linkages with groups outside the country work very well to assist the Salvadoran people to develop strong, vital communities. This is part of the social and economic rebuilding that needs to take place throughout the country. While communities like San Jose Las Flores receive a good deal of help from international donors, there is no question that the local people are the ones in control.

Nelson will be arranging part of our schedule for this year. This is very exciting - all this will be new and will finally allow us to work closely with educators in El Salvador. We will be hearing some of the specifics of what this part of the program will look like in January. I plan to blog this information as it comes out. The material that is being prepared will be uniquely fashioned to the work we want to do in the Compadres project.

Here is a little information on the CCR:

The Association of Communities for the Development of Chalatenango-CCR was founded in June of 1987 during the armed conflict in El Salvador, as an answer to the need to repopulate the communities of the North-eastern part of Chalatenango that had been destroyed by the armed conflict. Thanks to the work of the CCR the people who were exiled in the refugee camp in Mesa Grande Honduras, refugee camps inside the country and in other countries were able to repopulate the communities devastated by the war. With the signing of the Peace Accords in 1992, the CCR reoriented its work to organize and facilitate the reconstruction of the communities, and advocate that the Peace Accords be met and the process of democratization of the country move forward. Today the CCR works with 100 communities in 22 of the 33 municipalities of Chalatenango, promoting community organization and development through popularly elected community boards, legal representatives of their communities.

I believe that there is great potential here for collaboration. In my next entry, I will write about Teachers Without Borders - another new partner for Compadres.
Posted by mcswa1@gmail.com at 8:55 AM

Email ThisBlogThis!Share to TwitterShare to FacebookShare to Pinterest
Labels: Association of Communities for the Development of Chalatenango-CCR, Compadres