After the excitement of a two hour blackout last night, our crew was eager to get the day started. We met with the Youth wing of the ARDM, an absolutely inspiring bunch of young people.


This group is faced with a multitude of challenges. They spoke about their philosophy of why the youth in Cinquera and adjacent communities require organization. Their parents and grandparents were forced into war, and one day will die. The young people of this area have no choice but to work towards the improvement of their villages. Gabriel suggested, "that we can't just expect seniors and our parents defend our community. It is imperative the youth accept their responsibility to expand the gains achieved from the Civil War."

This organization has coordinated a silk-screening business, a welding coop, a handicraft shop and a drum circle.

Their biggest challenge remains inspiring more young people to care about their community. Evelyn, a member, said, "the capitalist system wants to domesticate us and we need to struggle everyday so that the mass media doesn't indoctrinate us. They throw smoke screens so we don't seen our reality-- that we're hungry or not working of other social problems. ".


Milton explained the difficulty of communicating their issues to the bigger world. "These twin programs are important as the objective is to live together as brothers and sisters in solidarity. Many people lie about the reality of our situation, but I hope you now have a different vision about our communities and will show people the exact reality that we struggle with," he said. "We are beginning the journey of being agents of change because we believe another world is possible. "

Raphael, a former guerilla soldier turned park ranger, was our guide through the Cinquera forest. Students were able to have a first hand experience in seeing the make shift hospitals used by the guerillas during the war. The 'Vietnamese Kitchen' demonstrated the clever tactics of the rebels in hiding their position from the government choppers flying above. Their camps dot the hills and serve as a reminder of the resilience of a people fighting for their freedom.

Roberto, our brilliant translator, explained one reason the Americans wanted to stop funding the war. 'the guerillas,' he said, "required one bullet to kill a man. A soldier: 77." the war had become a cash grab for the men fighting for the oppressive government and had become more wealthy. They weren't interested in ending a conflict in which they profited. 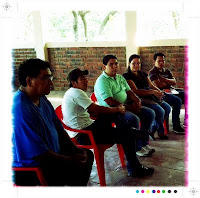 Email ThisBlogThis!Share to TwitterShare to FacebookShare to Pinterest
Labels: youth