A Day of Contrasts

Today laid in stark contrast to the two previous. We started in the Cathedral of San Salvador where we paid our respects to Oscar Romero at his tomb in the basement. We wondered towards the park opposite of the Cathedral; Roberto told us about the massacre that occurred at Romero's Funeral. Strange to think that such a bustling space could have been the location of so many deaths.


We were then led along the outskirts of the market. Block upon block of merchandise are hocked by people of all ages. Shoes, liberated from sweatshops, baby chickens, belts, electronics, clothing and everything imaginable are sold to the poor of the city. The same products would be sold several times more expensive at the malls, but would be inexcessible to so many for purchase. Witnessing this, for some of the HT/St.FX delegates, was the first real moment of discomfort.

Palm Sunday mass centered around the importance of the poor in Jesus' arrival to Jerusalum. Liberation theology reminded listeners of the gifts waiting for them in the afterlife.

The group then travelled into Chalentango province to spend a few days at Trinity's Partner school community, San Jose Las Flores. This quaint little village has a long history of resistance; it is a stronghold of the leftist FMLN group. Here we met with the Community Council, who enlightened our delegation on the issues they face. 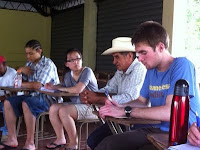 The students were captivated by the efforts made by these people to resist mining companies from extracting minerals from their beautiful landscape. The organization of this community was an inspiration to us all. The association was thankful to CRIPDES for their hard work
in helping San Jose Las Flores to achieve all they have.

A late night soccer game and roosters crowing will become the norm. 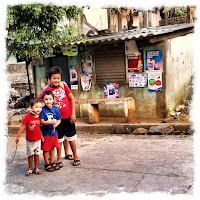