Today's overcast sky was a blessing for our hike up to the rim of one of El Salvador's volcanoes. The long walk to the bottom of the crater would take an hour, but the climb back up the 900m hole would take several hours more. Our group preferred to hover around the edge and dream of another time we'd have the physical ability to tackle the hike. We were fascinated by the tropical flowers and the volcanic ash and rock slowly exposing itself under the dry, dusty conditions.

Nicole, a student at Holy Trinity, thought the crater was 'really cool'. She'd never seen such a hole before. Lisa, another Trinity student, remarked, 'it's not as cool unless you're there'. Certainly, pictures didn't do the massive hole justice.

An hour later, the group arrived at San Andres, an ancient Mayan acropolis and trading centre. The structure rises out of the fields of cocoa and coffee, hinting about the civilization once here.

Only 5% of the city has been excavated. The federal government has little money to fund the massive excavation project. Work has been done in similar structures in Mexico, but as of now, no plans are in the works for El Salvador.

Also on this property, a large series of baths are found. These structures represent the earliest colonialization of this area. The natives, subject to Spanish conquistadors, worked the indigo processing plants once operating here. Water circulated through the leaves of the indigo plant and eventally produced a putty, which, when dried, became the dark indigo dye powder. 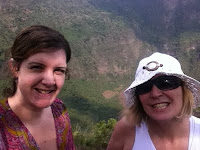 Two of our teachers - Maureen Bourke and Stephanie Pearson