This morning we woke up to the beautiful inner court yard of Sister Peggy's hostel. Sister Peggy is an American nun who has lived in Suchitoto for 25 years. She lived through the war in one of the areas most brutally affected by the fighting.
Suchitoto was one of the centers of the resistance. Over 1000 civilians were killed in a number of massacres that took place in the surrounding countryside.
Sister Peggy was part of a group of nuns that helped resettle refugees that had lived in church compounds for years In San Salvador. The hostel we stayed in is an abandoned school that has only recently been restored. Like much of the country, they are still rebuilding.
Each encounter is like peeling another layer off an onion. Our encounter with the sister was brief, but it leaves more questions. She talked briefly about the issue of youth and those who continue to leave the country for better opportunities in the North. She talked about the lack of students in the schools. She worries about the impact of the gangs and what the new Plan Pueblo Panama road will do to communities like San Jose Las Flores.
Another layer and more to learn. 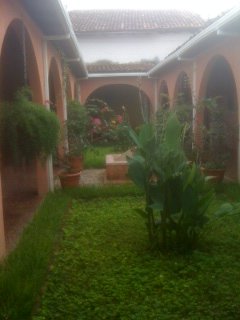 Sent from my iPhone
Posted by mcswa1@gmail.com at 10:27 AM