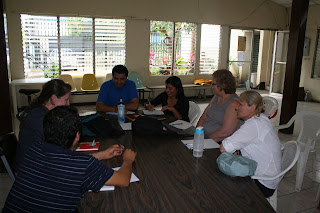 First day, our meeting with Rosa and Bernardo of CRIPDES


We met with Rosa and Bernardo, the current president and vice-president of CRIPDES respectively. Always on our delegations we begin to set context by meeting with our hosts, CRIPDES. Rosa started with a history of the organization. Formerly the Christian Committee of the Displaced, CRIPDES was founded in 1984 to support people displaced by the Salvadoran civil war as they returned to their homes. At the time, there was much repression in the countryside. Massacres had taken place on the Sumpul River in and around Suchitoto, San Vincente and other areas. People were forced to move from place to place. Many left for Honduras, Nicaragua, the United States and also San Salvador. Most of the original board members were women. CRIPDES quickly got involved in resettling the displaced population. They linked themselves to Salvaide in Canada and Sister Cities in the United States.

It was hard to bring people back to the countryside; the army did not want the people resettled. There were no services for the people, no access to education or health care. People had to learn to help themselves. They became their own teachers and they had to learn how to look after each other medically as well. People also did not have access to clean drinking water or even land. CRIPDES worked with communities and helped them to become organized.

After the war ended, the struggle continued. CRIPDES assisted women as they advocated for their rights. They trained popular educators in order to get schools going again. This work is on-going, some communities have schools and teachers however in other areas, there is a lack of teachers and schools. There is a great deal of work to do in this area!

CRIPDES has done a great amount of work on the issue of water privatization. Rosa was amongst several staff members who were imprisoned a few years ago as they took part in protests against water privatization policies of the government. CRIPDES members were actually charged as terrorists under post-911 legislation. The charges were eventually dropped, but the law they were charged under still exists.

CRIPDES works in 390 communities across the country. They are divided up into regional groupings that include the CCR (Chalatenango), PROGRESO (Suchitoto), San Vincente and La Libertad. Within each community there are local organizations. Good, strong organization is certainly the key to success for CRIPDES. Throughout the organization, there is a strong emphasis on programming for youth and women. Training is the key and CRIPDES uses popular education methods to empower youth and women.

CRIPDES, along with many other Salvadoran groups focuses on the issue of mining. National and especially international laws favor the exploitation of mineral resources by mining companies. Most of these companies are Canadian. The main problem is that El Salvador is a densely populated country. People live where companies want to mine. Currently there are 29 mining projects on hold as the current Salvadoran government studies the possibility of banning mining outright in the country.

The drive to exploit these resources has led to violence, especially in Cabanas, where Pacific Rim is hoping to develop a gold mine. Five people, including a woman eight months pregnant, have been killed over the past two years as a direct result of this conflict. An economy based on exploitation is not sustainable. CRIPDES advocates for the development of a local economy focusing on local crops and animals. Tourism is also being encouraged as a well to develop resources in a sustainable fashion.

This was our introduction to the work of CRIPDES. Themes relating to mining and sustainable development will reoccur throughout our meetings. 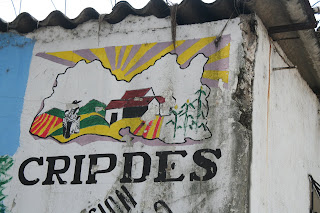 CRIPDES logo outside the main office in San Salvador

Email ThisBlogThis!Share to TwitterShare to FacebookShare to Pinterest
Labels: Association of Communities for the Development of Chalatenango-CCR, Cabañas, CRIPDES