We meet the teachers of San Jose Las Flores – July 8 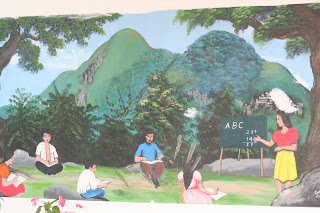 An early classroom in the woods as depicted on a wall mural at the school On our first full day in San Jose las Flores we sat down with the teachers we would be working with for the next week. There was Blanca, Jose, Lydia, Morena, Abalose, Esperanza, Nina, Douglas, Salvdor and Vilma. They taught from kindergarten to grade 9. Before learning more about their education methods, we needed to understand how this community had developed over the years. 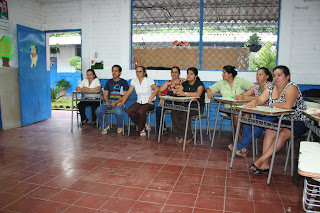 Some of the teacher group we met with every day at the school In 1986, Bishop Damas was invited into the area to witness the plight of the people. He was able to see what was happening to the people and how they were being oppressed by the army. The bishop publically denounced what was going on and resolved to help the people reclaim their towns. On June 20th, 36 families who had previously taken refuge in the Church were escorted back to San Jose Las Flores. They were joined by people who had spent the previous six years hiding in the mountains. The community they returned to had been completely destroyed in earlier battles. Gradually, the town was rebuilt and people started to look for projects to sustain the community. Women started a community kitchen and a bread shop. While the projects were small, the projects allowed people to take charge of their own development. The people also built their first school out of adobe. 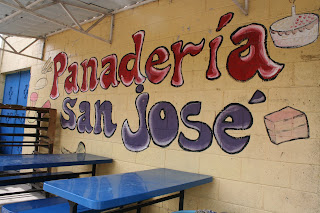 One of the community project – the bread shop The teachers started to tell us how they organized themselves. We learned first that they actually chose their own principal! A principal is chosen for a three-year term. The principal can stay on if the teachers agree to this. The principal is not paid any more than the teachers and it was very evident that they all worked together as a team. Decisions affecting the school were debated and decided upon as a group. The students are very motivated to come to school. There is little specialized equipment in the school, but this is changing due to donations from Holy Trinity High School here in Ottawa. The school now has a computer lab of twelve computers. The school lacks specialized equipment for art and phys.ed and there are no special programs in these areas, there is very little support for students with learning disabilities. The roof is in need of repair, there is no science lab and there is a lack of good textbooks. Still, the teachers are patient, they are aware that they lack a great deal, but they are seeing some change especially with support from outside the community. This year for the first time, the school has an English language teacher (Salvadore). There are also plans to dedicate a teacher to work with kids with learning disabilities. They are also experimenting with afternoon enrichment classes in art and phys.ed. Usually, the primary and junior students go to school in the morning. The teachers are now volunteering their time to develop some of these enrichment studies. 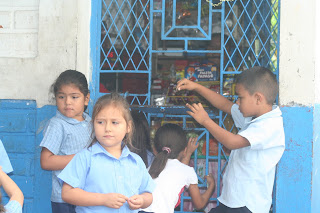 Kindergarten kids line up for the morning snack The teachers also discussed the need for psychological and emotional support. The students they work with all come from families that were traumatized in the war. Students are also malnourished so there is a need to provide children with healthy food while they are at school. The teachers are now considering projects that will allow students to grow food and raise livestock. They are even thinking of raising fish on the school grounds. We all see that there are lots of challenges facing the school community. The exciting thing about these people is that they are constantly planning new and innovative ways to solve these problems!
Posted by mcswa1@gmail.com at 1:50 PM