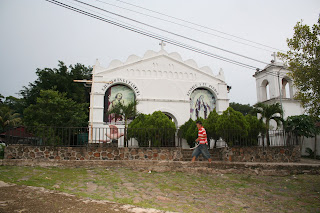 The church was one of the few buildings standing when the community returned in 1986 It was very important that all teachers had a chance to tell their stories. Everyone had been exhausted by the end of the previous day’s session. Today, Lidia continued with her story. When she was 12 years old, she lived in the mountains. She saw this as a privilege, she was alive. She and other teachers talked about trying to share these experiences with their students. The parents are reluctant to do so. Like the others, she has lots of nightmares. Morena continued by relating how her father was killed when she was six years old. The army was following them so they got used to hiding and running all the time. She is still very nervous and anxious much of the time. She and her family lived in Honduras for two years. When they returned in 1990, the community was already rebuilding houses in San Jose Las Flores. Still, the army attacked the people. Several times they would shoot at the people from the hills above the town. Her cousin was killed and her sister was injured in these attacks. Much of what happened to these people remains unresolved. Several times, our group leader Migual spoke of the need for justice – a need that remains to be fulfilled. The trauma remains he believes, because there has been no justice. Others say that God will punish those who committed these crimes. We asked them why they decided to come back here when there was so much danger. They quickly answered that many of them had been running for six years and were simply ‘burned out’. The community and the FMLN was looking for an alternative to hiding in the forests. To illustrate how the community was resettled, the teachers then showed us an old video taken during a mass celebrating the return of families to San Jose Las Flores. The footage is incredible and really needs to be seen by a wider audience. You can see some of the teachers as young children. They all look malnourished, afraid and hollow. Surrounding them in the background you can see FMLN troops guarding the community. The town has been totally ruined. The only recognizable building is the church. A mass is taking place and the people are celebrating their return from the refugee centers and the forest. The local people are accompanied by people from Spain and the United States. They also had the support of their local bishop. It was a great privilege to share these old videos with our friends. It was like watching home movies in someone’s basement! They laughed and cheered when they saw someone that they knew. As the videos continued, we saw the community celebrate their first corn harvest. This was three months after the first video. The difference was startling. The children played and laughed and looked healthy and happy. He community was being rebuilt. There was an obvious sense of community pulling together to reclaim their homes. You could tell already that these people were not beaten and that after all that had happened, these people would survive. 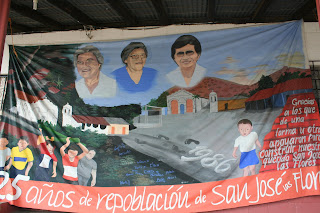 A banner celebrating the 25th anniversary of the return to San Jose las Flores
Posted by mcswa1@gmail.com at 12:57 PM