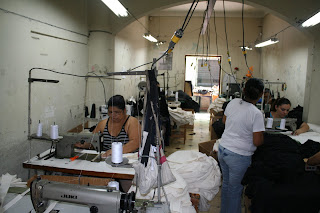 
We asked to meet with representatives of the Concertacion as part of our orientation this year. It is difficult to really understand the relationship between men and women in El Salvador, but we felt it was important to get some sense of how things are for women and especially how things are changing. Rosa, the President of CRIPDES spent two hours talking about women’s issues with us. I hope this session will become a regular part of our delegation program. Later, after meeting with Rosa, we were able to visit a women’s sewing co-op to see an empowerment program in action. The women are currently making t-shirts for the Canadian Federation of Students. I hope they will soon be able to make Compadres y Comadres shirts for us!

In 1995, a collection of women’s organizations and Development and Peace started the Concertacion as a way to develop awareness in El Salvador of the inequality that exists between women and men. The group decided to work in marginalized communities and with the rural poor. Their main goal was to talk to women about their rights. Inequality exists in many ways, women are victimized by the police, and there are no long-term shelters for women who are being abused by their partners. Men still play a dominant role in the family and in society in general. This position is reinforced by the Church in most cases.

It was explained to us that work needs to be done to change attitudes amongst women and men. Women are being taught to realize that they have rights and options especially when they find themselves in an abusive relationship. In general, the task of promotion of equal rights focuses on three main initiatives – the promotion of women’s rights within society, the education of women so that they know what their rights are and the development of economic initiatives to help women become more independent. Micro credit projects were mentioned several times as a way to help women develop some independence.

The current government has initiated the development of women’s centers in some of the rural communities. These centers will act as a resource for women when they need medical care or legal advice. The government is also refurbishing the main maternity hospital which has for years suffered from very overcrowded conditions. 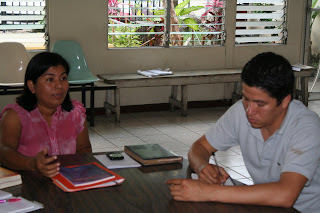 Rosa speaks to us about women’s issues in El Salvador