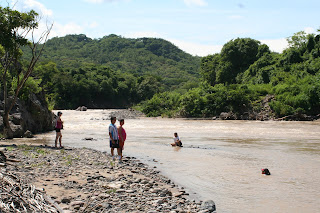 The Sumpul River near San Jose las Flores It is impossible to discuss education and the development of a new generation of Salvadorans without discussing the impact of the war and specifically the Sumpul River Massacre. Every teacher lost family members during the war, each has a story to tell about the massacre. When we asked the teachers how they deal with the massacre 31 years later, each teacher asked to speak. Nelson started with his story. Nelson was two years old when the massacre took place. He lost his mother and his seven-month old brother at that time. She disappeared, he drowned in the river. The family of Nelson’s mother was totally wiped out at this time. In total, 15 people from his family were killed, many drowning in the river as they fled the army who was determined to clear the area of anyone who could support the insurgents. Nelson was obviously traumatized by what he experienced. He still sees dead people when he sleeps and sometimes he gets depressed. He says it helps when he talks to his daughter Ireni. Sometimes they try to imagine what her uncle would look like now if he was alive. His experiences have motivated him to do the best he can for the current generation of students. Another teacher talked about what she remembered as a three-year old. She recalls crossing the Sumpul to get away from the soldiers. She saw her uncle get shot as he tried to carry a body across the river. Many of the people who made it across the river were shot by Honduran soldiers who were supporting the Salvadoran army. In some cases, babies were thrown on bayonets and pregnant women were cut open and their babies were ripped from them. This teacher still dreams of soldiers following her. Esperanza followed by telling her story. She was four years old in 1980. Everyone had to run because the army was coming. Her mother was found and she was killed. Then the soldiers put the body where the community could see it, but they were unable to get to her mother to recover the body. The army captured a group of children and pretended to prepare to shoot them also, but the children were able to escape when the soldiers were distracted. Her grandfather was also killed, he was decapitated. To survive, people had to dig holes in the ground. They wore dark clothing so that they could hide from the planes that searched for them. The people hid from the army in the woods where they had no clean water or access to health services. Many times they encountered people hanged in the forest by the military. Her husband also lost his mother at this time. Today they find it difficult to describe what they experienced to their grandchildren, the children find it hard to believe the stories. Many people are sick today, Esperanza believes due to the trauma they suffered during this period. 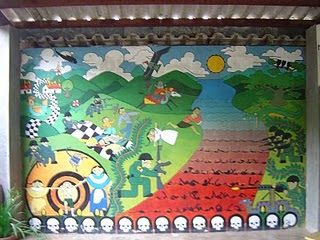 Mural from the town of Arcatao Chalatenango - Central American Politics Teresa continued. In her area, the army would paint white or black hands on the doors of peoples’ houses. They did this in the night, but no one really knew what the hands meant. After several hands were painted on their door, Teresa’s grandmother took the children to a refugee centre. Her father had already been killed in the war. Any man in this area was considered by the army to be an insurgent. If you were captured, you were tortured. They would routinely cut off part of the body ending with the eyes. Estella was eight years old when the army came to her village. Three of her brothers were hiding with 25 other people. They were found by the army – all of them were killed. Estella was hiding in another house. The soldiers called to them and asked them to come out, but they had the wrong house. Because of this mistake she survived. Her father found the bodies when he returned to the village. He had to wait three days before it was considered safe to bury the bodies. One young boy did survive buried under the bodies. He was found by guerillas two days after the shooting. The teachers continued on and on with stories of atrocities. People were burned alive in their own ovens or hung up like piñatas. Others were impaled on sticks or were mutilated. People broke down as they told their stories. In a country where family is everything, all these people live missing aunts, uncles, mothers, fathers, brothers and sisters. The pain is still there; it has not been dealt with or resolved. This was an incredibly powerful session. Almost every teacher had a chance to speak. Finally, Nelson said we had to stop; the teachers had to get ready for afternoon classes. Something had certainly changed by the end of this session. The teachers had shared with us some of the most painful memories they live with every day. Our relationship has changed in some very important ways. 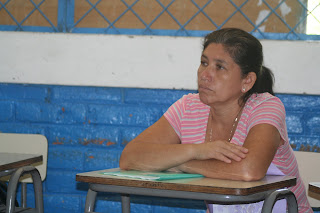 Vilma started teaching in the forests when she was 12
Posted by mcswa1@gmail.com at 6:20 PM