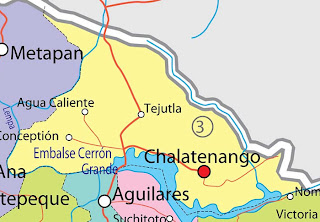 We have now moved our group to Chalatenango. We will be in this very interesting and beautiful part of the country for the next eight days. We began our journey by meeting members of the The Association of Communities for the Development of Chalatenango-CCR. This arm of CRIPDES was founded in June of 1987 during the armed conflict in El Salvador, as an answer to the need to repopulate the communities of the North-eastern part of Chalatenango that had been destroyed by the armed conflict. (Sister Cities website) One of their board members is Nelson Orellana-Secretary of Popular Education, from San José Las Flores. Nelson will be our host while we are in san Jose Las Flores. We also met other board members working on women’s issues and health. The CCR started as a response to the displacements caused by the war. People in the region no longer had access to health care and education. For the first time, we learned that the children during the conflict learned under the trees in the mountains. People developed methods of popular education based on the desire to keep basic education services going even though the war raged al around them. Nelson started as a teacher when he himself was in grade 5. This was typical of the teachers at that time. We will learn much more about this later. Over time, these volunteer teachers were trained and certified to work in towns throughout the department. They are unified by their desire to build a better society out of the ruin on the war years. There are now 19 schools and over 1700 students in the communities surrounding Chalatenango. Another major theme that was discussed in this introductory session was mining. This is a topic we will come back to later in this journal. It makes a great deal of sense that this is a major concern for the people of Chalatenango. Members of the CCR spoke to us about their struggle to return to the land in the midst of the war. They tell stories of people being escorted back to their communities by nuns, priests and members of the international community. People continued to be killed by the military for years after they returned to the towns and villages. People who have struggled so valiantly for their lands will not now easily give up territory to mining companies from the North. More on this later. 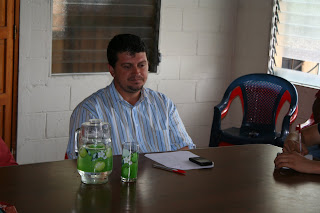 Our first meeting with Nelson in the offices of the CCR
Posted by mcswa1@gmail.com at 11:51 AM