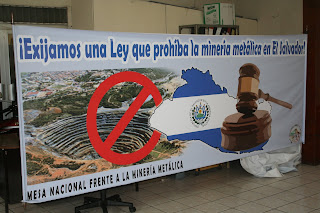 One of the issues of greatest importance to NGOs in El Salvador is mining. We touched on this topic on our first meeting with CRIPDES. On our second day, this was the focus of our morning meeting. There is not a strong tradition of mining in El Salvador. The Mesa is learning from the unfortunate experiences of other countries in Central America. While some people believe that mining will be good for the country, there is great concern that mining operations will have a negative impact on the fragile environment of El Salvador.


Free trade agreements like CAFTA allow international companies to come in and exert authority over the national government of the country. Currently, Pacific Rim is suing the government using mechanisms available under CAFTA.

Why is there such opposition to mining in El Salvador? First, the environment of the country is fragile. El Salvador’s major river, the Lempa is shared with Honduras. El Salvador relies on the river for irrigation, power, tourism and fishing. There is grave concern that mining operations would deplete this vital national resource. Most of the potential mines are located in the north of the country. Most of the agricultural production also occurs in the north. This is a country that already relies on food imports and needs to put more land into production. Mining is a threat to initiatives that encourage food production.

While mining companies argue that their operations will bring jobs to poor underemployed areas, it is also recognized that 98% of the profits from mining will flow back to the country of origin, leaving very little permanent wealth in El Salvador.

There is also an unacceptable social cost to mining. As mentioned earlier, there is a high social cost to the search for minerals. In Cabanas, five people have died in fighting within communities. There is concern that there will be more violence in an area that has experienced a great deal of violence over the past twenty years. Apart from the murders, Radio Victoria a community radio station in Cabanas has received many threats in reaction to their reporting on the mining issue.

The solution may lie in creating a law against mining in El Salvador. Such a law exists in Costa Rica and is being studied by the government. While proposals are being studied, Pacific Rim and other mining companies continue to pursue claims against the country. 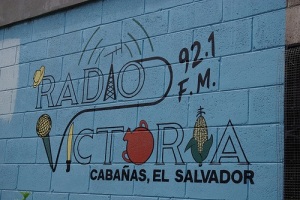